In yet more proof that the London Swans profile is on the rise, a motley crew of Swannies made breakfast prime time appearances on both the Today Show and Sunrise yesterday ahead of this weekend’s Royal Wedding. 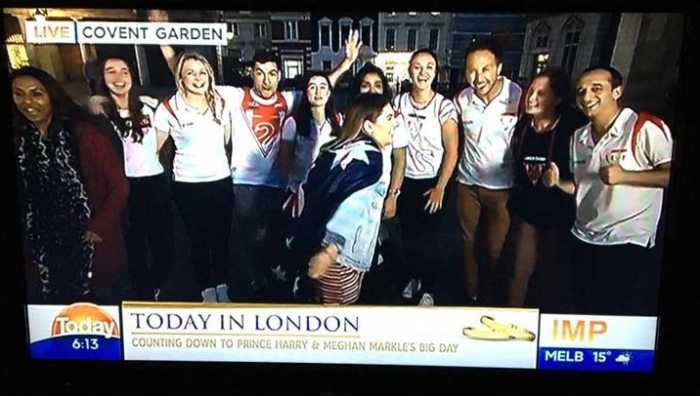 Coraled by resident-fame hunter Kritika Rampal, the group were interviewed by the Today Show’s Sylvia Jefferies near Covent Garden.

Perhaps not surprisingly it was former Victorian family reality TV show hearthrob (yes, it’s a niche market) David Cardamone that stole centre stage as he spread the word for Aussie Rules in the UK’s capital on live TV.

With a shot of fame in their bloodstream, this Swannies group wasn’t content with just one morning show appearance though.

Sensing an opportunity to not only access a bar tab but meet everyone’s favourite financial advisor-come-TV-personality David Koch – the Swannies totted off to the licenced establishment where Seven’s Sunrise programme was filming.

It appears as though David Cardamone was keen to add to his showreel though this time with a different hot air performance – we’re speculating here, but by the looks of this screenshot Kritika Rampal and Aislinn Catherine were left downwind of his Sunrise appearance.

Of course no fame-chasing is complete without a selfie to prove it – and Port Adelaide President David Koch, “Kochie”, was happy to indulge our Swannies.

Both programmes were in London to cover the build up to the Royal Wedding this weekend between Prince Harry and Meghan Markle.

Unconfirmed reports are that both Mark Baretta and Kochie said they might ditch the wedding to watch the Swannies on Saturday.

It’s not too late to join the London Swans this year either! Simply contact us via this website or send us a message on Facebook for more information.