The Swannies traveled to the historic UK city of Oxford on February 23 for the first pre-season hitout of 2019!

In total, 22 Swans made their way up for the 16-a-side match against an Oxford University side who had already qualified for the 9-a-side university competition Grand Final (to be held March 9).

Among the 22 for the Swans were 6 players new to the Swans in 2019 with some not having played in over 5 years.

Needless to say, the Oxford side were much sharper from the outset and jumped to a 3-goal lead in the first quarter as uncharacteristic February sun broke through and the mercury hit a balmy 12 degrees. Two game-ending injuries in the first five minutes also didn’t help the Swannies cause.

In the second and third quarters the Swannies worked their way into the game as the host of new faces began to gel and the team moved the ball cleanly from defence into attack. Tom Graham, Luke McManus, Sam Tarca and Adrian Hulston were among the key names to step up during the quarters, while Irishman Eoin Culligan was the standout performer for the Swans all day.

Captain/Coach Chris Loy also made an impact even despite registering the first “falcon” of the year while attempting an uncontested mark.

(EDITOR’S NOTE: Anecdotal reports from the game suggest the word “Sherrin” could be clearly read on his forehead after the game.) 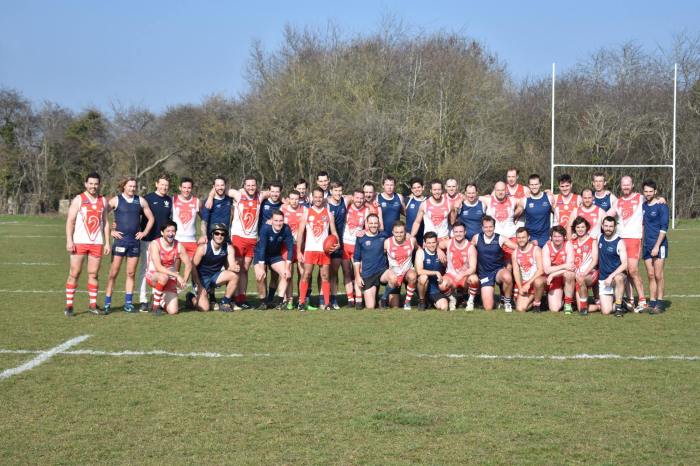 Two quickfire goals at the start of the last quarter saw the Swans move within 3 goals, however, the clean and class midfield of Oxford quickly hit back and overran the London lads in last half of the quarter.

Post-Game: Taking in the sights of Oxford!

With the first game of 2018 out of the way, our Swans headed for some much needed rehydration! After joining the Oxford team to trade war-stories from the game over pints, our Swans made their way to the historic pub “The Chequers” to watch the England Vs Wales Six Nations rugby union match.

The Turf Tavern – most famous for being the spot where Former Australian Prime Minister Bob Hawke broke the Guiness World Record for time to drink a yardglass of beer – was the last point of call for the London blokes before the quick train ride back.

All in all – another great day out with the Swans!

It’s not too late to join the London Swans this year either! Simply contact us via this website or send us a message on Facebook for more information.